Forgetting to have fun!

Last weekend our workplace had its Family Christmas Party. Now hubby & I work for the same but at different sites, so we are lucky enough to get a Christmas party each – which we thought was pretty good!

But this year we found out about the Family Christmas Party and man is it good!

I love a work show, but since having kids I tend to try and stay nice cos I know the kids will still be there the next day and with a hangover its no fun at all. Which I am sure MANY of you know already :)

So off we trot to this day where we didn’t know really what to expect. It was at Moonee Valley racecourse and the flyer had some pretty cool rides and stuff on it.

As we walk through the front we see the crazy ride in the photo below.

At this point hubby and I look at each other and say how happy we are that Daughter E is not up for that stuff…yet!

We continue through the amazing set up and to the Kiddy Ride’s and threw E straight on one!
Hubby turned to me and said she looked sad and I honestly thought she looked bored.

She jumped off and wanted to go on the Ferris Wheel – cool with us as we could all do that as a family.

As we walked down to the Ferris Wheel we went past all the rides you would see at the show. Well as soon as she saw them that were it! She was it she was pointing like a mad person. She wanted to go on everything!!!

We both thought she was a bit young (she is only 6 remember) but she met the height requirement to ride with an adult.

So we headed to the first ride and I was kinda hoping she would back out last minute as I was the one having to go on it with her! Hubby has a very sensitive tummy and said he was not up for spinning around…..

No backing out! She was on the ride like a flash and loved it.

Woo Hooing and even throwing her little hands in the air.

Meanwhile I am trying to hold on to her, trying to wedge my body in that bloody carriage so I didn’t move and yelling at E to put her hands down!

Must have been a sight!

After that ride she was off running to the next.

It wasn’t till about the 3rd ride I found that I was actually enjoying myself on theses rides too. I haven’t done anything like this in years!

It was great to be able to laugh, scream and just have fun!

Finally we talked Hubby into going on 1 ride with E, it was so funny. Pic of the ride is below! Hubby was saying even before it had finished E was saying she was going on it again, this time with me!

This was the last ride of the day and the funniest; you can’t see E but I am there in full stupid face, laughing glory. The guy a couple up from me was making me laugh so hard with his comments, it was just the funniest thing ever.

I think I had forgotten what it is like to just have fun! Looking silly and all!

So dinner that night was the most simple ever! And most of it came out of packets, but it was simple and tasty.

Some BBQ Pork Bun that went in the steamer, following by Salt & Pepper Squid Salad…. 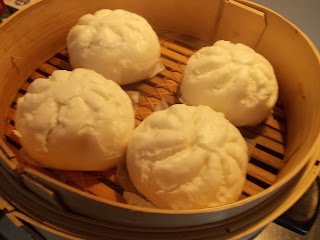 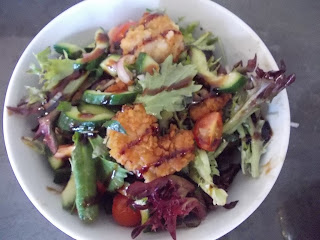 So how was it?

It's Thursday morning and my working week is over.

I think I am going to like this 3 days a week thing....while it last's anyway.

I was really weird being back at work. There has been SO MANY changes. I have been at the business for over 9 years but felt like the new girl on Monday.

Change is good and I think I am going to fit in well with the new team.

What was/is hard is learning a totally new role and trying to get my head around it all.

My brain is a little fried.

So that was my first week back at work (even managed a public holiday)!

Yesterday was also the first day Daughter E went to before and after school care and Baby O went to childcare for the whole day.

Daughter E was just fine, I left a little earlier in the morning as I planned to spent 15 minutes with her. But she asked my to leave about 30 seconds after we walked in. So yes she was fine!

Baby O got dropped off by hubby, he said bubs was fine but he felt a little sad to walk away and just leave him there. I know that feeling oh so well. It is a little heartbreaking the first few times.

I have to leave work dead on 5pm to be able to collect them both by 6pm, as the centers shut and you get charged up the wazoo if your late.

I collected Daughter E first, again she was all good. So then we rushed over to pick up Baby O, now he was a different story.

You could tell he had been crying, puffy red eyes and lots of boogers. He was slumped on the floor when we walked in. He looked up and it was like he was dreaming, he didn't know if we were real or not, so it took him a moment. Then he burst into tears and could not crawl to me quick enough.

The girls in the room said he had been fine, but a little sad when he was getting tired. I beg to differ I think he had been sad all day and just wanted his mum.

He was very clingy last night and even today.

I am not looking forward to Monday drop off...might get hubby to do it!

As for dinner last night I managed to grill some chicken and cook some sweet potato and peas! How boring!!

I have to get this menu plan in place...stay tuned.

The party is over, time to go back to work!

I signed the contract and am heading back to work, on Monday!!!

A few weeks earlier than expected but I got myself a new Part Time role that is going to be amazing.

1. The role is what I have been wanting to do for ages.
2. It gives me great work life balance for a year, which I think I will need before going back full time.

So happy days for me!

The only downside to this is I have done myself out of a cleaner. The deal was, when I went back full time I was going to get a cleaner in to help out. But now sadly its still me!

I had a really emotional day yesterday, I cried A LOT. It was tears of joy and sadness and I think a little bit of fear.

I am going to miss being home with Baby O and miss doing the school run (madness to say I know!) and miss cooking. I have been able to cook heaps this past year.

I know once I get into the swing of it I will be fine. And I know the kids will be just fine too.

So Jamie's 15 Minute Meals has come at a great time for me. I have been even thinking about doing a meal planner for the week nights. And his food will be going on it for sure!

I said on my Facebook, I don't care if it takes longer than 15 minutes, his food is just great, healthy and wholesome. So if it take's me 30 or even 40 min that's pretty good in my book.

So I did the Asian Beef with Salad last night. What I love about this is how simple, that should be with a capital S, and how you can just throw together anything you have in your fridge to make the salad. Oh and don't get me started on flavour...OMG! It was just soooo good!

I don't have the recipe book, so I had to remember what he did on the TV..Easy enough though.

Now I did the salad in about 5 minutes, its was a matter of shredding and slicing and putting on a platter.
I then put the steak on my board, covered it in olive oil and liberally covered in the Chinese 5 spice. I cooked that on my griddle pan, turning every minute or so till med/rare.
The for the dressing I got out a old jar with a lid put everything in and shook like crazy.
Once the steak had rested, I sliced it up and added to the salad platter and gave the dressing another mad shake and poured away. Gave it all a toss and it was done.

Seriously amazing!
Posted by No Knife Skills at 13:31 No comments:

No Knife Skills
I'm not a chef, food stylist or professional writer and I have no knife skills.... I do however love to cook and raise my family and would love to share a little of my life with you!